The one where I asked the Dalai Lama a question 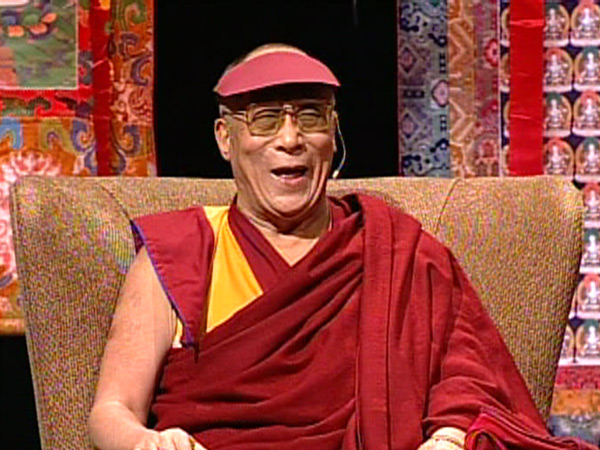 Some years ago, my friend Josh was organizing a press conference at MIT for the Dalai Lama and the prominent neuroscientist Richard Davidson. They were there to answer questions about the Dalai Lama’s decades-long dialogue with scientists exploring the relationship of science and Eastern thought. Josh asked me if I wanted to go and of course I did.

There were about 30 of us seated in the audience and the Dalai Lama and Richie Davidson were about twenty feet away on a slightly raised platform, seated at a table.

The journalists asked the Dalai Lama things like, “How did you become interested science?” “Why did you want to conduct these meetings with scientists? “What has been the purpose of these dialogues?” All perfectly reasonable questions.

Upon hearing them, however, I realized, I am the only Buddhist in the room. (Besides Josh.) Here was a great spiritual adept who could answer my questions about life, death, the meaning of it all, and so on.

I suddenly felt an obligation, an urge, something, to ask a question that would reference the dharma and make this not just about science. (Does that make sense?) It was like we had Plato or Seneca the Younger or Jigme Lingpa or Nikola Tesla in the room and we were asking him how he liked his lunch or some such. (To me.)

One of the most essential Buddhist teachings (perhaps it is the central teaching) is that all beings possess Buddhanature. All beings are capable of complete wakefulness and liberation. We each have this seed, every ant, every cat (obvs), every human, every angel, every demon, seen or unseen. Because of this, there is perpetual cause for rejoicing and also for hope.

(Once, many years ago, His Holiness was meeting with a group of Western therapists and meditation teachers. One of them, Sharon Salzburg, asked him how she could help her students with low self-esteem. Low self-esteem? What is that, His Holiness asked. I’ve never heard of that. His translator tried to explain, which was not so easy because there is no word in Tibetan for “low self-esteem.” Finally, he succeeded. HHDL was incredulous. Are you sure your students have this, he pressed? She said, indeed they do. In fact, I myself suffer from this. This blew his mind, apparently. He pointed to everyone in the room, Do you have this? Do you? They all nodded yes, He said, How can you have low self-esteem if you possess Buddhanature?)

When it comes to Buddhanature, there are no maybes about it. There are thousands, maybe millions of teachings on Buddhanature. It has been studied, analyzed, classified, described, and pointed to over 2600 years. There are teachings on it that are so sharp and shattering that they can only be taught in a literal millisecond. (This is called “pointing out instruction.”) And there are teachings that occupy volumes upon volumes and describe each layer of Buddhanature in extraordinary detail. The Dalai Lama knows these teachings like FOR REAL. The vast sophistication and refinement of these teachings are literally beyond my comprehension. I’m not kidding.

The press conference was about to end. There is time for one more question, Josh said.

I was interested to see that my hand went up. (What was I going to ask him?!)

I stood up. I made anjali and bowed. Your Holiness, have any of your dialogues with scientists changed your view of Buddhanature?

My friends, I was a recipient of the Dalai Lama double take. Buddhanature? He said. Did you say Buddhanature? I said yes and he laughed his friggin head off for like two whole Dalai Lama minutes. He looked at Richie, pointed to him, and said something like, when you start studying Buddhanature, then I’ll know we’ve really got something (in some Dalai Lama sort of way). Still laughing.

Suddenly, he stopped laughing, looked at me pointblank, and said, “Too soon to tell.”

Too soon to tell, my friends.