My new book, “The Four Noble Truths of Love” 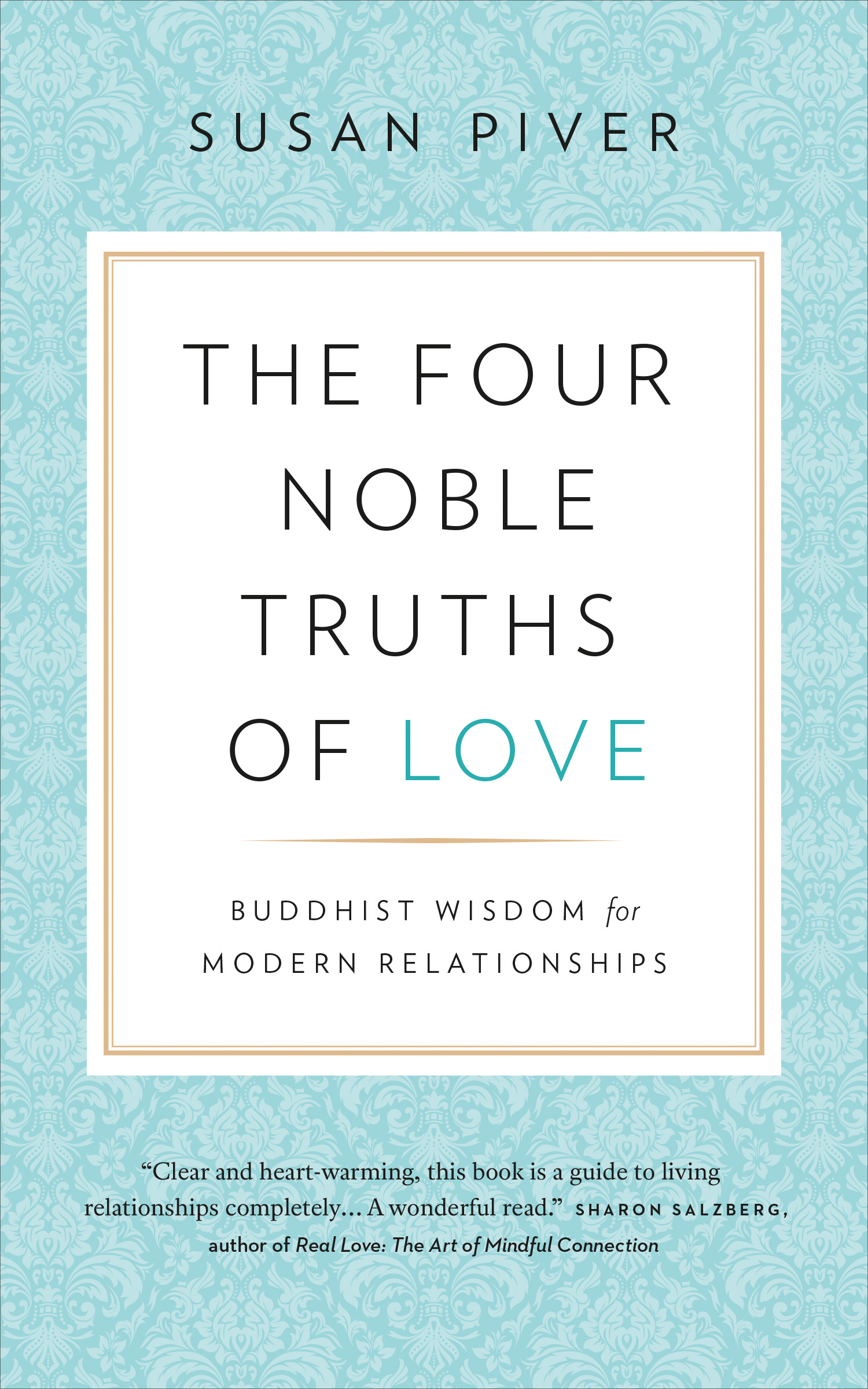 Can’t wait to share it with you. I hope you will find it inspiring, useful, and real. It is about what it really takes to open your heart in a love relationship.

We are self-publishing this, y’all. I wrote this book for us specifically. Every single decision that has gone into creating it has been made with you in mind. It is truly a heart offering, created in the intimacy of our community, without any outside influences.

Here is an excerpt from the introduction and the final cover design, above. Comments, reflections, suggestions are always welcome.

Some time ago, my husband, Duncan, and I were locked in a state of ongoing disagreement. This dis- agreement had no center, theme, object, or subject. It was more like a demonic presence. Whatever we discussed gave rise to conflict, whether it was about what time to leave for the movies, if the dishes in the dishwasher were clean or dirty, which bank to use, or if we belonged together as a couple. Once we even argued about what time it was. Even a question as simple as “Where do you want to eat dinner?” could provoke talk of divorce.

(True story: When I posed this question one night, we were driving on a country road and, for some reason, we exploded at each other. I made him pull over and let me out of the car… in France. I had no idea where we were. I didn’t care—I just wanted out. I walked into a field until I got scared and went back to the car, arms folded.)

When we were to go somewhere, we disagreed about what we would do once we arrived. When someone said something to us, we disagreed about what it meant. When we attempted to discuss our relationship woes, we dis- agreed about how to do so, where to lay blame, and how to resolve them. This went on not for days or weeks, but for months. We tried many solutions: talking, not talking, making love, avoiding each other, yelling, ignoring, and, finally, at least for me, just sobbing. Nothing worked. Every interaction ended with anger, hurt feelings, or numbness. I felt so lonely, and I am sure he did too. What was going on? There was nothing to argue about, yet everything pro- voked conflict. It was dreadful, terrifying. We were afraid to go near each other.

I was ready to admit defeat. I thought, I have no idea where to begin fixing this. Then a voice whispered to me: Begin at the beginning. (Why are these voices always so simple and correct? And why don’t they pipe up ear- lier?) It continued: At the beginning are four noble truths. They are:

Life is suffering (because everything changes).
Grasping is the cause of suffering.
It is possible to stop suffering.
There is a path for doing so.

As a twenty-years-plus student of Buddhism, these words meant something to me. What would the dharma say about my dilemma, I wondered. Why had I never thought to examine this question in relation to my relationship? After all, my Buddhist practice and study had been an unfailing guide for two decades in all other areas of my life.

But could these ancient truths be applied to my search for a lasting relationship? I was doubtful. Since the major- ity of great teachers lived in monasteries or caves and turned their backs on the things of this world so that they could fully embrace the spiritual path through prayer, devotion, and unconventionality, I had subtly imagined that their teachings would not be relevant to my modern love-life problems. I mean, they lived in monasteries, not apartments. They meditated in forests, not on the subway. They had no spouses, possessions, jobs, or bank accounts.

Yes, they taught deeply, brilliantly, piercingly about love and the sacred world of emotions, but until this moment I had never thought to apply these teachings to twen- ty-first-century love affairs, relationships, and heartbreak. When I did, I found a source of profound illumination that enabled me to work with my relationship problems—not to resolve them and tie them up with neat bows, but as an unerring road map back to love and intimacy. Best of all, this road map was not useful just to me, but to my husband as well, even though he is not a Buddhist practitioner. No particular beliefs, dogmas, or practices were needed to mine this wisdom.

To apply a Buddhist viewpoint to relationships is eye-opening. It points to a radically different worldview, one that runs counter to the spirit of much of the conven- tional advice we receive. It prioritizes unending curiosity over conclusiveness in such a way that conclusions are never arrived at while openness of heart and of mind continue to expand. It posits having no agenda as a path to attainment. It suggests that the solution to problems in the outer world are solved by making changes within and that problems within are solved by dissolving the boundary between self and other. To examine these views carefully is to turn ourselves upside down over and over and, rather than finding explanations by stabilizing in the upside-down, we find what we seek in the turning itself.

As far as I know, this work on relationships is the first written by a Western Buddhist teacher who is also a wife. I humbly hold the intention to bring Buddhist teachings of the highest sort out of the monastery, out of cultural trap- pings, and into our living rooms, out on our grocery store runs, to our arguments over money, and to what it means to love altogether. The limits I face in sharing this with you are my personal limits as a student and a teacher. On one hand, I am quite daunted because I know my own spiritual puniness, but on the other, my impediments keep me just confused enough to continually question and vet my own notions. Rather than speaking to you from the remove of a perfected relationship, I come to you from deep in the middle of the fray myself but armed with the extraordinary trick bag that comes from two decades of serious Buddhist practice and study. I hope that you will find my offering to you to be both helpful and honest. I hope that you will benefit from my clarity and confusion equally.

Following this is an examination of each truth through a combination of reflections on ancient teachings and per- sonal essays from my own life on what it is like to apply these teachings in my own relationship. We will look at principles and practices for actually implementing the Four Noble Truths of Love, which is far more meaning- ful than considering their logic. It is one thing to read an instruction manual, but it is another to apply what you have learned in real time. Whether in bed or battle, the manual is always left behind, and anyway, as boxer Mike Tyson once said, “Everyone has a plan till they get punched in the face.” The point here is that studying the rules of engagement may be useful, but only up to a point. Books eventually go back on the shelf, and what really matters is what you are capable of when love arises from nowhere, hearts are shattered, and the best-laid plans dissolve.

Finally, I will share three practices with you that help you to go beyond simply understanding the Four Noble Truths. They will actually change the way your heart works to make it more open, flexible, and strong because these practices have the power to deepen compassion, wisdom, and confidence in love itself.

The first practice is the all-important practice of mind- fulness-awareness meditation, which creates a strong foundation for everything you will read in this work. It is essential.

The second practice is maitri (lovingkindness) meditation in two forms: first, the traditional and then a way that is specific to couples. This practice actually teaches you about love that extends beyond (but still includes) what you may feel on any given day.

In the third practice, I will offer you a way to converse with each other as a spiritual practice. Rather than sitting alone and silently working with your mind, this technique puts you in direct contact with each other. It is a practice for you to do together.

Though these practices (the first two in particular) are fundamental to Buddhism, I am not suggesting that you and your partner should become Buddhists, adopt certain beliefs, or become spiritual acolytes. Rather, I offer them as a way to work with your thoughts and feelings in every relationship you have. Without such a way, you will be at the mercy of preconceived notions, childhood woundings, outdated judgments, and bad habits—all of which you will project onto others who are also struggling with the con- tents of their own mind. When this happens, our neuroses are having the real relationship, not our hearts.

Everything in this book is designed to point you over and over to your inherent goodness and your indestructible capacity to love. You will find encouragement to take the biggest view possible of love, not as a protected hiding place but as a path of courage and openness that leads to true joy.

You can find your copy here.