Free chapter from
The Buddhist Enneagram: Nine Paths to Warriorship

With wisdom, creativity, and artistry, Susan Piver brings a Buddhist lens to the spiritual map of the enneagram. The results are vibrant and nourishing; a banquet of insights that help us transmute our difficult emotions into pure expressions of our basic goodness.

–Tara Brach, Author of Radical Acceptance and Trusting the Gold

Send it to Me

How does it feel when your book is published? 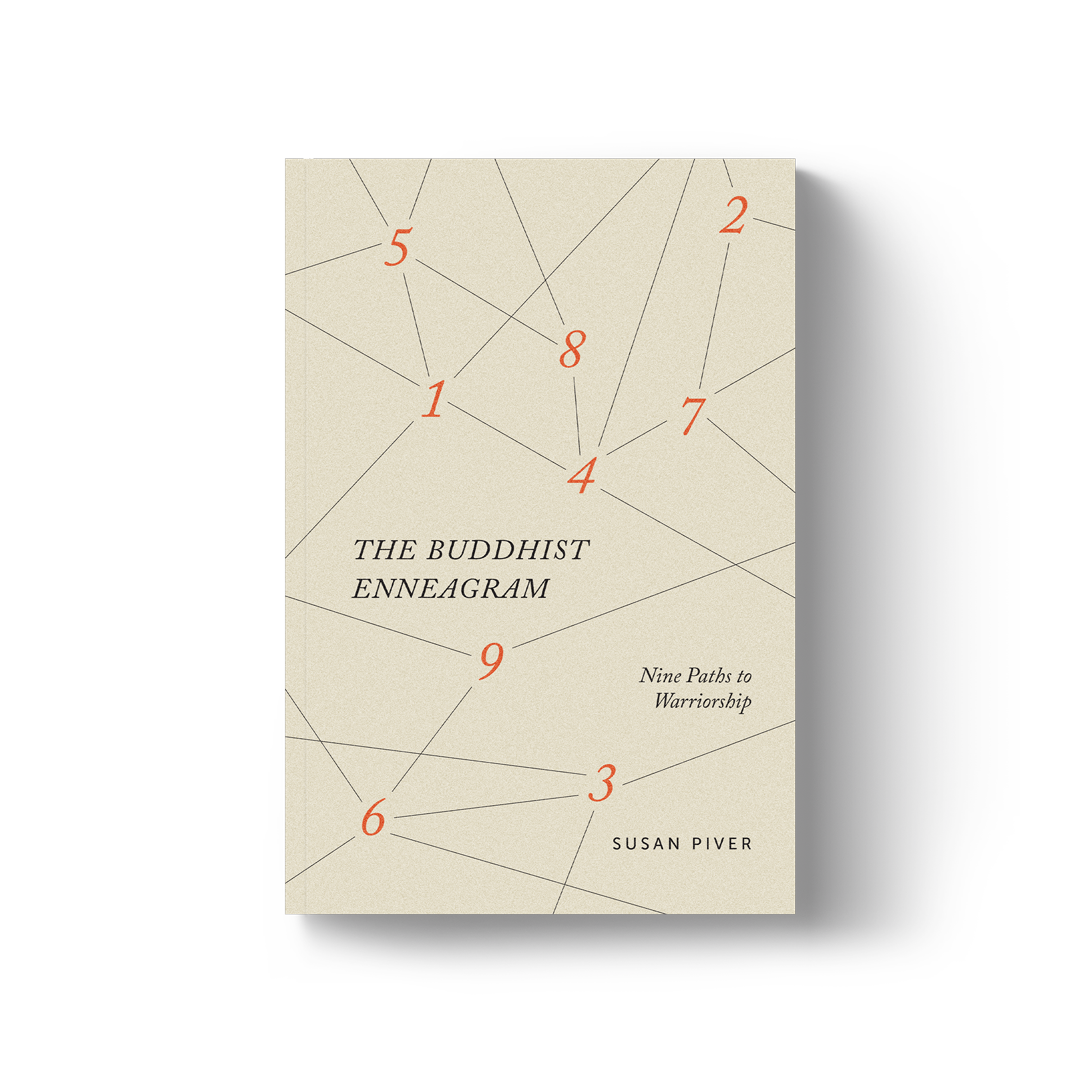 My new book, The Buddhist Enneagram: Nine Paths to Warriorship will be out in a few days. It’s been in the works for three years. I hope everyone will read it. I hope no one will. Trying to separate the one who created it from the one who now speaks to you about it…reminding myself over and over: no matter what happens, it is not a commentary on your worth.

I’ve been at this precipice before but no amount of experience makes it any easier. If I could take it all in stride, that would be wonderful but my “stride” is one continuous trip. All puns intended.

Yesterday, I was talking with a friend about the journey to being a published author. What a privilege it is to even contemplate. I’ve authored eight books. Just looking at that sentence, I think, who am I kidding? That never happened. Except…it did. Along the way, I have experienced vast success and puke-inducing failure. I’ve worked with huge publishing houses, not-huge publishing houses, and, finally, my own imprint.

My friend asked me how it all started and, before I answered, I flashed on many of the author origin stories heard over the years, most involving elements such as: working furtively in the early morning (or late night) hours, searching for an agent who would understand, receiving multiple rejections, having hope, giving up hope, staying the course…until, by some stroke of genius or luck, a relationship is made with a publisher and some degree of renown is achieved. I love these stories. I have endless admiration for any writer who sticks with the process, honors their own voice and point of view, breaks through, and stays the course that begins with A and ends at Z.

None of that happened to me. I started at “Z”. I never intended to be a writer. I fell backwards into the whole thing. If that sounds like a humble brag, I apologize. But the truth is, it was (and remains) one continuous accident.

It began decades ago when I was talking with my boyfriend about getting married. Well, he was talking to me about it. I was doing everything in my power (short of covering my ears and intoning NAH NAH NAH) to ignore the issue. Why marry someone you love? It rarely seemed to work out.

He persisted (gods love him), which compelled me to turn around and face the situation. Okay, I thought, what if I said yes? How do I increase the odds that this will actually work? (I don’t have the romance gene. Venus in Capricorn is my best explanation.) When I reflected on previous relationships, almost all lovely (I’ve been lucky) but no longer existent, I realized that they had failed, not because we didn’t love each other, but because we couldn’t make a life together that we loved.

That was such an interesting notion. My curiosity and risk-taking nature then motivated me to advance the conversation (Sun in Sagittarius in the house of Sagittarius is my best explanation.) I knew that I loved him and he loved me. Whatever. But what did I know about how he viewed our life? Not much. So I began to write down questions like “How much money do you have, like actual dollars and cents?”, “What is your kid (previous marriage) going to call me?”, and “What holidays will we celebrate?” Maybe there were ten more such questions, all very down-to-earth. It turned out these questions led to conversations that included the full spectra of hope and fear. There was nothing romantic about it. It was extremely intimate, however.

I was telling someone about it all and she said, “That would make a good book.” I had never thought of that but when, by happenstance, I met a literary agent, I asked him what he thought. “Could be,” he said and sent me an email about how to write a proposal.

He had little luck selling the book. Then, one day, I was walking down the street (I remember the exact Manhattan intersection where this happened: at the corner of Park Avenue and 21st Street) when I ran into a guy I knew who worked in publishing. I knew people in publishing because, at the time, I worked in the music business and there were occasions when the two industries met at events and such. How are you, fine, how are you, what’s new…and I told him about the book idea. He asked for the proposal. The agent sent it to him and…he bought it. So, I wrote the book (somehow) and it came out to pretty much no acclaim. Also, the editorial process was brutal. Neither the editor nor I had any idea who I was. Anyway, that was that.

About a year later, I was sitting at my desk working on a new project for my business (which produced multimedia book packages combining written works with audio components), when the phone rang. It was the Oprah show. They were planning an episode called “What Happens After the Wedding?” We talked about my book, their aims, and so on…and then they said goodbye. It wasn’t until much later that I realized this was what is called a pre-interview. Long story short, a few days later, they invited me to be on the show. Actually, I was on two times because the topic (not me) proved to be a hit.

After the second time, all hell broke loose. My book, The Hard Questions, sold out all over the US. It hit #2 on the NY Times bestseller list and stayed there for 6 weeks. Massive financial offers began pouring in for my next book. (WHAT NEXT BOOK. I wondered.) I was wildly gratified and excited.

Until the next book came out and it was an utter flop. It was mortifying; among the worst experiences of my life. Being cursed at by the Publisher was involved. They sought, by nefarious means, to get out of their contract with me. They basically threw me out on my ear. It was over and I knew that I would never write again.

It took about 5 years to consider another project, which also came about by coincidence when I suggested to one of my publishing clients (for my book packages) that they consider a product about meditation. I think this is going to be a big trend, I said to them in 2005. “Can you write it,” they asked? “No,” I said. “I’m not a meditation teacher.” As a deeply committed Buddhist practitioner since 1993, I took seriously the power of transmitting meditation instruction and how it ought only to be done by someone trained to do so…which was not me. “Well, we want you to write it,” they said.

So I took training to become an authorized meditation instructor in my Tibetan Buddhist lineage. (I actually flunked the first training and had to repeat it.) Then I wrote the book, How Not to Be Afraid of Your Own Life (or, as my father thought it was called, How Not to Be Afraid of Your Own Wife. Sorry, Dad! Wish I could have written that for you!) That book was a joy to write. I loved the publisher, St. Martin’s Press. It came out to little acclaim, but I was so proud of it. It put me back in the world of writing. I went on to write other books fully rooted in my Buddhist practice: The Wisdom of a Broken Heart (Simon and Schuster), Start Here Now: An Open-Hearted Guide to the Path and Practice of Meditation (Shambhala Publications). I’m proud of those books. They did moderately well. But after each experience, I saw my advances go down and the looks of disappointment on the publisher’s faces ‘bout killed me. I had the perpetual sense that editors and agents were looking over my shoulder to see who else they ought to be talking to.

Each publishing experience carried a particular flavor of pain. While my first experience was a massive success, each subsequent one was…not. It’s a wild and rare privilege to be published at all, but it’s also true that it is flavored with a strange kind of trauma, even with a so-called success. Everyone involved gazed at me with intense yet impersonal expectations for work that was, for me, indescribably intimate. The editorial process is like someone digging around in your heart without anesthesia. When the book is published, you feel like you’ve walked outside naked and asked, “Hey everybody, what do you think?” The publishing process is a massive roller coaster ride that often begins with YOU’RE AWESOME,THIS WILL BE GREAT, WE LOVE YOU SO MUCH and ends with “HAVE WE MET?”

At some point, I developed an online meditation community, The Open Heart Project. It grew to a healthy size. When it came time for the next book, The Four Noble Truths of Love: Buddhist Wisdom for Modern Relationships I went full-tilt into self-publishing. I could not face going on the ride again. No more positioning. No more proposals. No more analyses of the competition. No more arcane royalty statements that somehow always end up with me in the hole. No more trying to live up to the expectations of publishers, agents, bookstores. No more trying to use my own voice to sound like someone who could move units. NO. MORE.

The Four Noble Truths of Love has sold more than 15k copies and I am ecstatic about that. I wrote it. I published it. I sold it to human beings. (Well, not me exactly, but me and a small team of kind and brilliant colleagues without whom none of this would have worked.) I wrote, not for bookstores, but for the people who had been kind enough to give me their email addresses. It was a massive amount of work but I will never, ever play the publishing game again.

Now, The Buddhist Enneagram is about to be released. Holy fuck, y’all. Each book seemed like an impossible stretch, but this one…it almost snapped me in two. I wrote it in a cloud of confusion. In it, I said:

Writing this book confounded me more than anything I have ever attempted to create. It spun me around at every turn until I didn’t know which direction I was facing; I got lost over and over again. I wrote as if I knew what I was talking about but, upon rereading, realized I had no idea where it came from; I could not retrace my steps back to any particular source of knowing. The Buddhist Enneagram arose in the act of writing it and, I suppose, with the support of mysterious guides.

And that’s how it is. Each book is a full-tilt mystery. Writing is a complete mystery. What does the book even say? I can’t remember now. Will it sell? I have no idea. Is it any good? Please don’t ask me. I don’t even know how any of this happened.

“With wisdom, creativity and artistry, Susan Piver brings a Buddhist lens to the spiritual map of the Enneagram. The results are vibrant and nourishing; a banquet of insights that help us transmute our difficult emotions into pure expressions of our basic goodness.”