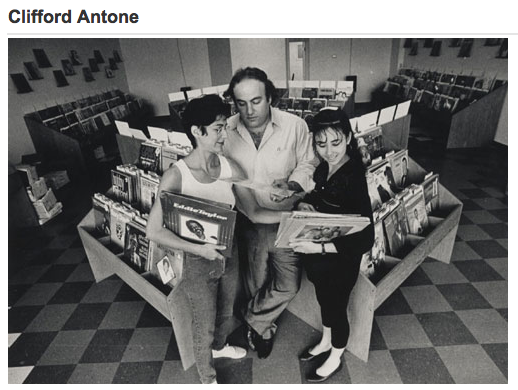 Last year, a dear friend died suddenly. He was the founder of a blues club I worked in. But that doesn’t really describe him. This man, Clifford Antone, devoted everything he owned and everything he was to blues music and musicians. It’s not like he was a saint (see below), but in a sense, he was (see below).

He had been to prison twice, convicted of selling marijuana. Not a few joints on the street corner either, more like several tons on a plane from Mexico. Whatever he earned, he spent it all, every penny, on the music and musicians he loved. He opened a nightclub in Austin, Texas in 1975 and brought blues icon Muddy Waters in for several weeks. Blues was not exactly popular in Texas at that time. When Muddy arrived in what was then a podunk Texas town and met this white, hippie college-kid club owner, he was not quite sure where he had landed. But, like everyone who passed through the doors of Antone’s, he had entered the world of Clifford. The stage was stocked with the best equipment—vintage amps and collectable guitars in perfect condition. In the window was a framed photo of Muddy, garlanded with flowers. Waiting to accompany him was a group of local musicians that eventually included Stevie and Jimmie Vaughan and at least a dozen other exceptional musicians who understood. Sitting in the audience waiting for the show to begin was just about nobody except for Clifford. And so it began.

After Muddy came Howlin‘ Wolf, Clifton Chenier, Albert King, B.B. King, Sunnyland Slim, and everybody else. Eventually, he launched a blues record store and a blues record label. When I arrived in 1986, the legend was in full bloom and, although Muddy and Howlin’ Wolf had passed, other living icons were taking the stage at Antone’s. Some came for a night, some came for a few months, and some, like blues harmonica player James Cotton and Muddy Waters’ piano player Pinetop Perkins, came to live. Albert Collins, John Lee Hooker, Otis Rush, Buddy Guy, Bobby “Blue” Bland, Jimmy Rogers—the list goes on and on—played night after night, backed by the stellar, mind-blowing, forget-ever-trying-to-explain-it Antone’s House Band. It was the most soulful place in the world. I am totally not exaggerating.

I worked with Clifford for almost 10 years, first as a cocktail waitress at his club, then a bartender, then the manager of his record label. We spent some crazy times together and had lots of agreements and disagreements. It was deep. In the mid-90s, I moved away and we became estranged. Just a few weeks before he died, I was in Austin visiting. Cliff and I had dinner together and there was nothing but love. We spent several hours in sweet reminiscence. Remember the time Doug Sahm almost pushed me (Susan) into a hotel swimming pool because I wouldn’t give the band a draw on the next night’s pay? (The first gig was yet to happen and there was nothing upon which to draw…) Remember when Albert King fired his band in the middle of a set? Remember the Japanese record label that wanted to license one of our records because they “had listened to it and were terrified?” (I think they meant something like “we were filled with terrific-ness.”)

By the time of our dinner, almost all the people we idolized were dead. His club still booked blues, but other acts brought in the profits. He was teaching a class at the University of Texas called “The Blues According to Clifford Antone” and this was his new stage. He loved turning kids on to his musical heroes but his heart was left in the past. The world he loved, gave everything to, where he had staked his soul, was gone. “When Albert (Collins) died, that was it for me,” he said. I think he already felt a bit like a ghost.

Last year, Clifford died at the age of 56 of a heart attack. When I went online to read about his passing in the Austin paper, the caption simply read, “Clifford Antone, 1949–2006.” Above the headline was a black and white photograph of him from the late 80s, in his record store. I was standing on his right and to his left was the other employee of Antone’s Record label, Connie. We were holding the label’s latest albums in our arms, pretending to show the covers to Clifford, who was smiling.

I looked at my own face and stopped. Who was that young woman? Who was now looking back at her? Where was all the music? I remembered the exuberance and inspiration and wildness of that time, and I felt happy and sad. All of it is gone, everything in that photograph is gone, somehow. Record albums disappeared for awhile. Connie lives in Brooklyn with her husband and their little baby girl. Clifford is in the ground. I’m sitting here typing this in Boston, looking at the picture of the three of us tacked to my bulletin board, surrounded by notes for a new book I’m writing, a picture of my husband and I at our wedding, and numerous Tibetan Buddhist symbols and deities. Out the window, spring leaves dim the sunshine that splashes across my desk in winter.

Sun and shade, past and present, happy and sad. Here. And gone. And here again.