A room of my own

In addition to creating a new online home (this redesigned website!!), I’ve taken a leap and decided to move to a new offline home as well—a workspace that is separate from my personal home.

For years, I have worked at home and there are many things I love about doing so. There is something powerful about removing the separation between work and personal life and just throwing up your hands about spending these hours working, these hours with family and friends, and these on self-care. I will tell you that, for me, this has never worked. It has been a relief to mush it all together.

That said, I live in a loft. With my personal husband. It is a true loft, one wide open space. Only the bathroom has a door to shut, so there is truly no separation.

This ought to be okay. Duncan (the aforementioned personal husband) goes to work every day and I am home by myself.

With the laundry. And the dishes. And the television. And the cats. Somehow, I spend many hours each day in distraction. This is especially so during those times I have designated for writing…

Recently I found myself posing the question, “what would happen if I took myself seriously as a writer?” (A question that even in typing it gives me shudders of pretentiousness and preciousness. GAH.) However. The answer? I would write. More. Not just when I felt like it.  I would create a space that was conducive to said activity. I would invite my true voice to say things and then write those things down. A lot.

Unexpectedly, such a space materialized.

A small studio apartment across the courtyard from us came up for rent. It is literally on the other side of the garden. I can see it out my window. If I took it, theoretically, I could dash over in my bathrobe without anyone really noticing. I could walk there  without my shoes on. I could make a cup of tea in my kitchen and it would be hot when I arrived. I could go at four in the morning or eleven at night and it would not be scary.

So I went to look at it. My first thought: it’s perfect. It is small but not closet-small. It has a window and a skylight. It is a little raggedy in a soulful way. It has a small kitchen and many electrical outlets. Did I mention that it is right across the courtyard from our apartment?!

Still, I was scared. What made me think I could add “studio rental” to my budget? What if I rented it and then spent all my time there doing…nothing? What if I tried to write but bupkes came out? And most of all, why did I need a separate space when I spent all day alone?? I told myself all kinds of things but the question that kept being loudest of all was, “what would happen if you took yourself seriously as a writer?”

Then, the kicker, the thing that made it impossible for me to say no. The owner of the unit said, well, why don’t you take it for a few months and see how it goes? If it works out, then you can sign a lease. If it doesn’t, we know other people who will rent it.”

I had been made an offer I could not refuse. I said okay.

Then I didn’t know what to do. All I knew was that I wanted it to be beautiful which would take time, so I would start with nothing in the space.

Then the woman who was moving out asked me if I wanted her couch because otherwise she was going to throw it or give it away. I said okay. (It was a nice couch!) So I started there. For the first days, that was all that was there. Then I brought in a lamp and a little table as a shrine. Then Duncan fished out of storage a beautiful rug that we had stashed when the cats began to decimate it. I unrolled it and liked the way it looked. A few more days went by when I realized that I missed my desk and desktop computer. (I had been working on my 11” MacBook Air and my eyes were complaining.) So I asked a neighbor to help me carry it over and within 45 minutes or so, my desk was setup and my computer and all the multiple backup drives that are guarding the Open Heart Project and all my books.

And that is where it stands.

I feel so hesitant about it all and not just because of the expense, although that is of great importance. A voice inside keeps trying to shame me for wanting this so much. It is shockingly vitriolic. We’ll see how it all works out. There is something about the unfolding that seems important. Wish me luck. 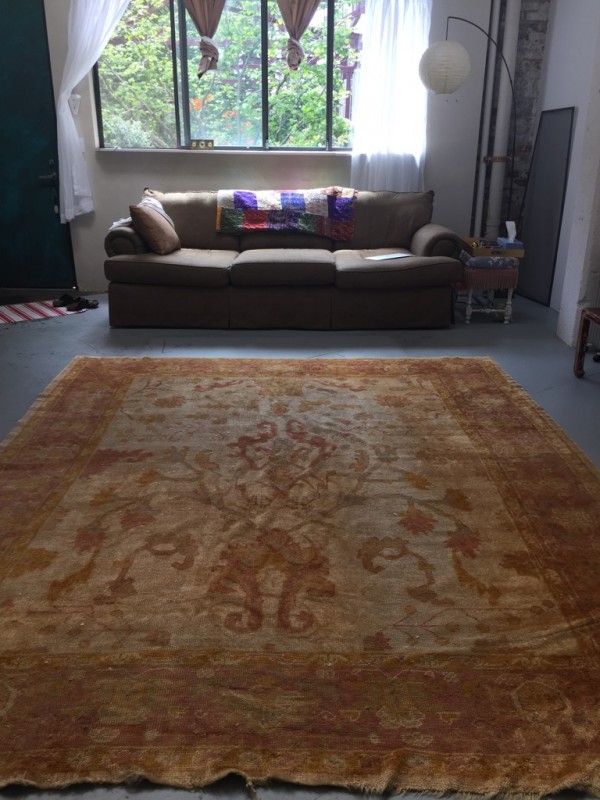