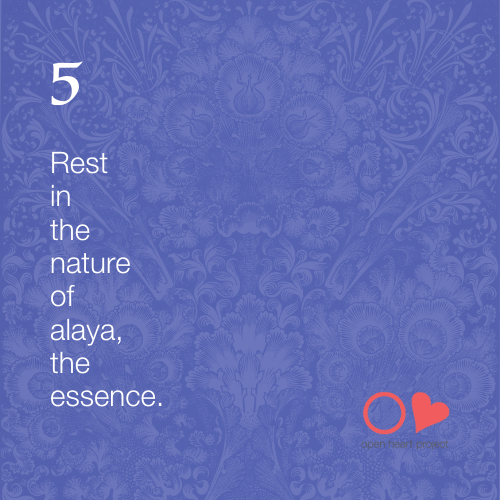 In the Open Heart Project sangha, we are contemplating one slogan per week from the 59 lojong (mind-training) slogans of Atisha. They date back over one thousand years.
.
There are 59 “slogans” which range from the obvious (First, train in the preliminaries) to the inspirational (Thank everyone) to the fascinatingly inscrutable (Three objects, three poisons, three seeds of virtue). They have a seemingly magical capacity to turn the mind from poverty-stricken to abundantly compassionate.
.
Slogans telegraph their true meaning when mixed with everyday life. Isolated from the chaos and beauty of being human, they are just words–but when experienced within a particular context (rather than the clinical and reductive environment of analysis), they have the power to puncture self-deception.
.
This week, we move on to the fifth slogan, “Rest in the nature of alaya, the essence.”
.
What is the alaya? In Buddhist thought, rather than, say, 3 levels of consciousness (unconscious, subconscious, conscious) 8 kinds are described.
.
The first 6 consciousnesses are connected to the sense perceptions, which include eye, ear, nose, tongue, body, and mind. The 7th consciousness acts as a kind of organizing principle that overlays a storyline of what we perceive. This storyline is always manufactured. The 8th consciousness is the alaya, sometimes also called the storehouse consciousness. It is where the seeds of our karma reside and therefore also where the seeds of future delusion–or enlightenment–live.
.
When we rest in the alaya, presumably, we are not planting any more seeds. A being who has ceased to plant karmic seeds is also called a Buddha.
.
https://openheartproject.com/open-heart-project/